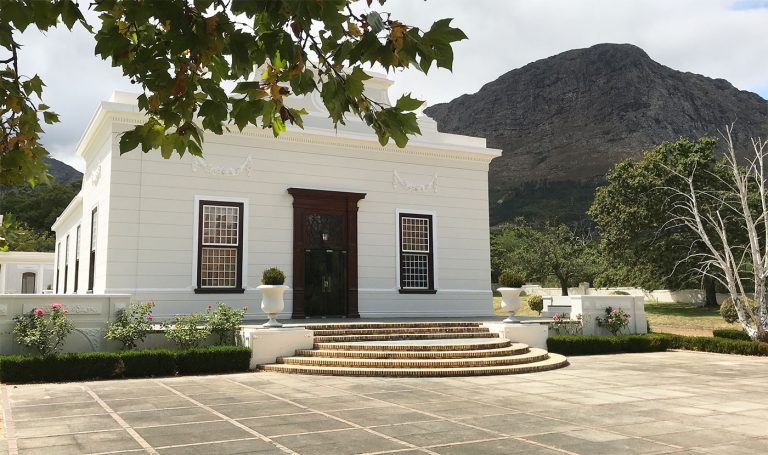 The building housing the Huguenot Memorial Museum is a reconstruction of one that originally stood in Kloof Street, Cape Town. It was built in 1791 as the residence of Baron Ferdinand van Rheede van Oudtshoorn – the son of a Cape governor and member of the Legislative Council. He named it Saasveld after his ancestral home in the Netherlands.

It is generally accepted that Saasveld was designed by the French military engineer and architect Louis Michel Thibault and that the decorations were the work of the German sculptor Anton Anreith.

By the late 1950s the Huguenot Society of South Africa had decided that a reconstructed Saasveld would serve well as a Huguenot Memorial Museum.

On 26 July 1957, the Franschhoek Farmers Association organised nine trucks to bring the remains of Saasveld to Franschhoek for safekeeping.

The Huguenot Memorial Museum was proclaimed in 1960 and initially housed in two rooms of the curator’s house (2 Huguenot St – now the Franschhoek Perfumery). Fundraising for the reconstruction of Saasveld continued until the mid-1960s. Once sufficient funds were raised, Franschhoek Meesterbouers – a highly-regarded local builder who also restored many of the valley’s historic buildings – undertook the reconstruction of the building on land donated by Mrs Bettie Hugo of La Provence.

Brian Mansergh – a direct descendant of the Van Rheede Van Oudtshoorn family – was appointed as the lead architect and was assisted by Prof Bax and other specialists as an advisory committee on the authenticity of the reconstructed building.

The Huguenot Memorial Museum was formally opened on 11 March 1967 by the then State President, Mr C. R Swart. A large multi-racial crowd had gathered for the occasion.

At the centre of the exhibition is a timeline with five themed rooms branching off from it. The rooms portray the themes: Flight, Sacred Texts, Home, Family and Legacy.