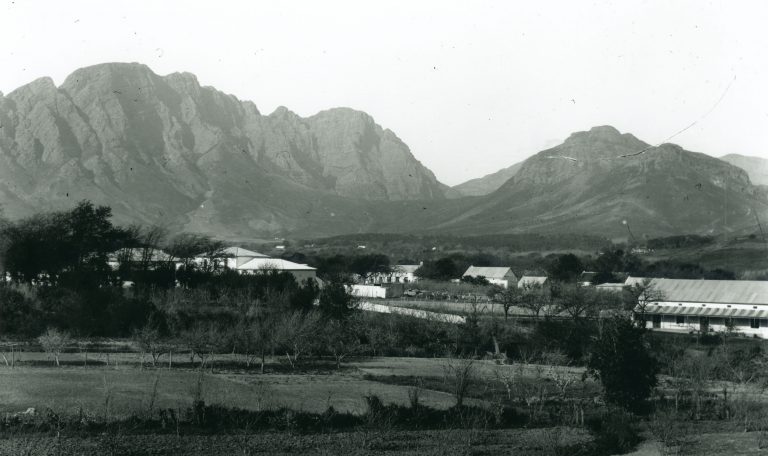 Franschhoek is situated on parts of the Huguenot farms La Cotte and Cabriere. The first erven in the town were surveyed by RF Aling, and were part of the farm La Cotte which belonged to Jan Gysbert Hugo. The church grounds together with the chapel (built 1833) and the manse (built 1837) formed the nucleus of the village and the southern boundary. The wagon trail (later Victoria Street and currently known as Huguenot Road) formed the western boundary with the present De Wet Street to the north and the present Dirkie Uys Street to the east. Part of the eastern boundary was formed by the erf on which the house La Rive stands.

A number of residents petitioned the Governor in 1859 to change the name of the village to Roubaixdorp after Mr P E de Roubaix, MP for Paarl. They argued that the name Franschhoek referred to the field-cornetcy and that the village had never been officially named. Their wish was granted and the village christened Roubaixdorp on Saturday 25th August, 1860 but it caused a division in the community and soon reverted to being called Franschhoek again.

The Huguenot Monument, which was erected in 1938 to celebrate the 250th anniversary of the arrival of the Huguenots at the Cape, was ceremonially inaugurated on 17th April, 1948.