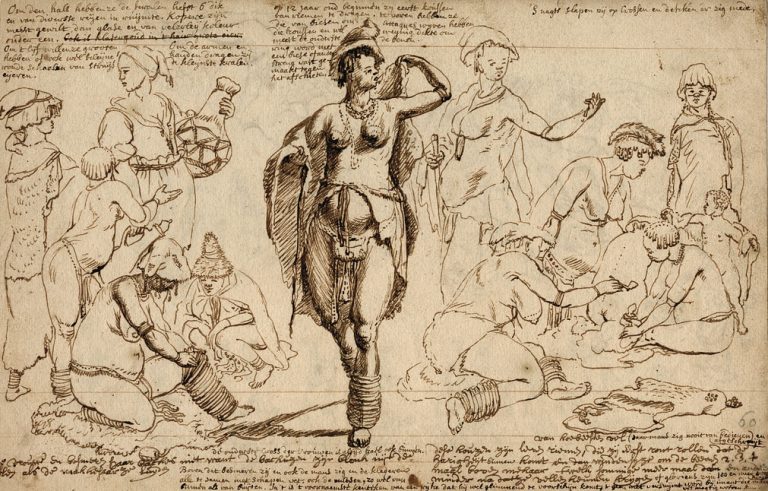 In the Franschhoek Valley there is evidence of human presence long, long before the late 1600s when the systematic written history of the valley began to be recorded by the European settlers.

Archaeological evidence in the Franschhoek region is, however, tenuous because of the absence of caves, which were favourite places for long-term habitation by ancient man. Because of the low-impact lifestyle of early man in the valley, just about all potentially useful archaeological remains were fatally exposed to the elements, with the result that what remains today has long since been scattered and displaced, weathered and decayed.

Nevertheless, for many tens of thousands of years the valley must have been frequented by nomadic hunter-gatherers (‘San’), and more recently, also by nomadic herders (‘Khoikhoi’), all of them migrating seasonally in and out of the valley in search of food and grazing. These individual nomadic groups, seldom more than about 150 individuals, lived in close harmony with the environment, leaving behind almost no sign of their presence.

Documentation dating from the late 1600s and most of the 1700s refer to the various Khoikhoi tribes passing through on a seasonal basis. It would primarily have been the Cochoqua who used the Berg River Valley as grazing land for their stock.

There are two sets of clues to ancient human habitation in the Franschhoek region: the abundant abandoned stone tools scattered throughout the valley, and some rare rock art. The stone tools are typically found on river terraces along the banks of the Berg River and its tributaries. Their archaeological style is mostly Early Stone Age – that is, fairly robust, somewhat large hand axes and related tools, though more sophisticated, and mostly smaller, stone tools also occur, suggesting Middle Stone Age as well as Later Stone Age origins. Drilled stones appear to be very rare.

Rock art is rare in the valley, with the best-documented examples in the Wemmershoek Valley to the east of the Franschhoek Valley where public access is limited because of the dam. The rock paintings – not rock engravings – depict a fairly realistic elephant image and were most likely produced by hunter-gatherer groups whose descendants are known as the San (or Soaqua, Sonqua or Bushmen – see box), rather than herders.

The relative abundance of rock art that has been documented in the Wemmershoek Valley may be an indication that its seclusion and mysterious sense of place may have been a key factor in its selection by the artist-shaman of the day as a suitable place for artwork.

What is in a name?

There have been numerous names for the indigenous peoples of this land, their meaning and use being tied to their interrelationships with each other, and with (mostly European) settlers as well as indigenous African Bantu people. The anglicised orthography or spelling of the various names, and their precise meaning, are problematic as the original languages are characterised by various definite click sounds not found in the European languages.

SOAQUA, SONQUA (abbreviated to SAN)
Hunter-gatherers so named by herding Khoikhoi, meaning ‘people different from ourselves’; a disparaging generic term referring to ‘the others’, particularly those viewed as of a lower status. The San passed through the Franschhoek Valley as nomads for several tens of thousands of years before the arrival of the first Europeans.

BUSHMEN
A European historic term, generally disparaging, referring to indigenous nomadic hunters and herders of southern Africa (also San). Some modern groups in the Kalahari have reclaimed the name ‘Bushman’.

HOTTENTOT
Historic name, now viewed as derogatory, for indigenous herding people of the Cape at the time of settlement by Europeans. In the English language used to describe people of ‘inferior intellect or culture’. Such negative use was compounded by derogatory depictions in European travel accounts of the time.

KHOIKHOI or KOEKHOE
Meaning ‘men or men’; used by herding and/or pastoralist groups to describe and distinguish themselves from San whom they considered a lower status. Also ‘the real people’. Common anglicised spelling is ‘Khoikhoi’; modern Nama orthography is ‘Khoekhoe’ (Kwena or Khoe-na are variations). The Khoikhoi lived in the Franschhoek Valley for ca 2000 years before the arrival of the first European settlers.

KHOISAN
Generic sackname used by some outsiders for Khoikhoi and San peoples (and their click languages). Due to distinct and significant differences between the hunter-gatherer and pastoralist societies, they would never have grouped themselves as such but would have used, most likely, their clan names, such as ‘Cochoqua’, ‘Goringhaiqua’, ‘Goarchoqua’, etc. They lacked an inclusive name for themselves larger than that of their language unit.