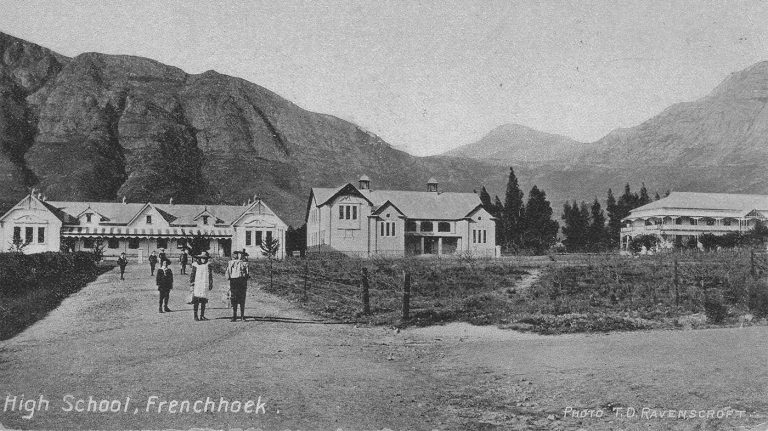 Due to the absence of organized education, children were taught at a number of private farm schools. A German by the name of Jungl ran a shop on the farm Cabriere (re-named Sieberust, re-named K.lein-Cabriere) wherein he also gave lessons.

On the adjoining farm, also Cabriere, Mr Toerien taught the children and was later followed by Petrus de Beer, a very strict teacher who laid great emphasis on the art of singing. It was said of him that many a Psalm and Hymn was beaten into the children.

On the farm La Dauphine, James Skead who arrived from England in 1842, taught for 4 years as well as for a few years on Cabriere.

The children were taught only reading, writing and arithmetic.

In 1847 F C M Voigt was appointed as reader by the church council. As was the custom, this post combined with that of teacher as well as lead singer and the lessons were conducted inside the chapel building. As from August 1850, Voigt’s school became the district school and he a government teacher with 64 pupils.

A second school was established in 1857 at La Motte with the first teacher being F Joubert who taught the children in Dutch. While this school flourished, the other declined.

To Date Franschhoek has 7 Schools: