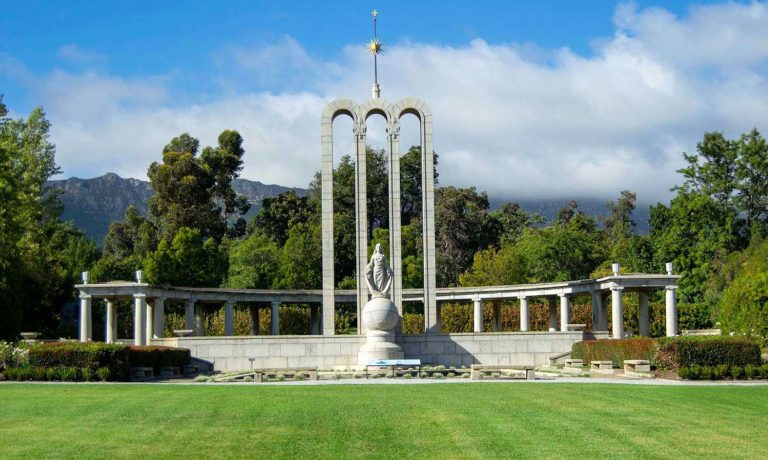 The Huguenot Monument represents the culmination of many efforts, both successful and not, over many years to commemorate the French Huguenots.

In the early part of the 20th century a Cape Town architect and Huguenot descendent, Carel Christiaan de Villiers, suggested that a monument be erected in Franschhoek in 1938 on the 250th anniversary of the arrival of the first French Huguenots in South Africa. The idea received backing and support from influential people in government, but due to the countrywide Voortrekker centenary celebrations in that year and the outbreak of World War II, the monument was only completed in 1943.

The monument was designed by J C Jongens, a Dutch architect, while the female figure was sculpted by the South African sculptor, Coert Steynberg. Built of Paarl granite and featuring Calvinia slate paving stones, it was officially unveiled on 18 April 1948 by Dr. A.J van der Merwe, moderator of the Cape Dutch Reformed Church.

Symbolism of the Huguenot Monument (Prof P. Coertzen)
The Huguenots and their coming to South Africa in 1688 are represented by the allegorical image of a women standing on top of the world. On her dress we see images of the Fleur de Lis, which underlines their French origin. She is throwing off the cloak of religious oppression from her shoulders. In her right hand there is a bible and in her left hand a broken chain. She stands on top of the world in a gesture of freedom. At the bottom of the world there are images of the ships that brought the Huguenots to South Africa, while their new heritage is conveyed by images of the bible, a harp, a bushel of corn, a grapevine and a spinning wheel. Behind her there are three arches symbolising the Holy Trinity, with the Sun of Righteousness above the three arches and above that the cross of Jesus the Christ. Behind her there is a colonnade walkway in a half circle, like arms embracing the woman. In front of her there is a pool of water which, together with the colonnade, conveys the protection, freedom and rest that they found at the southern tip of Africa.

From their own writings we know that freedom of conscience and religion were the most precious rights of all to the Huguenots. Today the Constitution of South Africa guarantees freedom of religion for every South African. All of this makes the Huguenot Monument a monument to which all South Africans can relate.