The French Wars of Religion 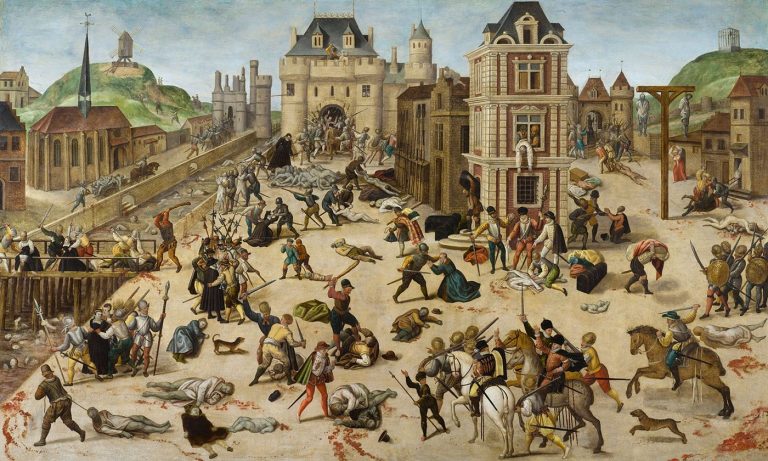 The French Wars of Religion were sparked by the Reformation, during which Protestants broke with the Catholic Church. This resulted in a long period of fighting between the Huguenots and the French king, during which thousands were killed. Many Huguenots were enslaved or driven away. Ongoing feuds over land and political power between aristocratic French families significantly contributed to these wars.

King was FRANCIS II (1559-1560) who was a minor, married to Mary, Queen of Scots. After his sudden death he was suceeded by his brother CHARLES IX (1560-1574), also a minor, whose mother, CATHERINE DE MEDICI acted as Regent. She tried to promote peace between the Catholics and Protestants by granting certain privileges to the Huguenots by means of the EDICT OF ST GERMAIN (17th January, 1561).

The peace became short-lived when on 1st March, 1562 a number of Catholics descended on a large Huguenot assembly in Vassy, killing 30 and wounding about 200. The Wars of Religion which followed (1562-1598), were a direct consequence of these VASSY MURDERS. Numerous attempts at bringing about peace followed, but proved unsuccessful.

By August 1570, the Regent Catherine de Medici was forced to declare the PEACE OF ST GERMAIN to prevent the Huguenots from taking Paris. Their leader, Gaspard de Coligny, succeeded in obtaining freedom of religious practice in all cities except Paris.

GASPARD DE COLIGNY was an Admiral of France as well as Governor of Picardy. He joined the Protestants in 1559, soon becoming their leader and spokesman.

The Peace of St Germain had illustrated clearly just how much power was vested in the Huguenots. The Catholics feared this power and it was decided to eliminate the Huguenots, particularly their leaders.

With the marriage of Prince HENRY OF NAVARRE, a Huguenot, to Marguerite de Valois (daughter of Catherine de Medici) on 23rd and 24th August, 1572 a golden opportunity presented itself. During this Feast of ST BARTHOLOMEW, thousands of Huguenots, including De Coligny, were massacred in Paris by the soldiers of the King. Henry of Navarre escaped, but in the weeks following, murder and mayhem spread throughout France. Many Huguenots fled to other European countries as a result. Numerous Religious Wars followed under the leadership of Charles IX.

Charles IX was succeeded by his brother HENRY III (1574-1589).
As he was childless, he was succeeded by Henry of Navarre as HENRY IV (1589-1610). Having adopted Catholicism for political reasons, Henry IV yet remained well disposed towards the Huguenots. He was able to bring an end to the Religious Wars through the PEACE OF VERVINS. On 13th April, 1598 through the proclamation of the EDICT OF NANTES he provided the Huguenots with more religious and political freedom than ever before. Under his reign France became united and a period of peace followed.

In his attempt to impose an absolute monarchy (the divine right of kings) in France, Cardinal RICHELIEU, Prime Minister to LOUIS XIII (1610-1643) decided to deprive the Huguenots of all political freedom, even in their fortified cities. In reaction the Huguenots decided in 1621 to resume the Religious Wars. Despite Huguenot opposition, Richelieu took their last fortified city, LA ROCHELLE on 28th October 1628. The MERCIFUL EDICT OF NîMES (1629) gave the Huguenots a certain right of existence but their political power was permanently removed.

After the death of Louis XIII in 1643, his widow, ANNE OF AUSTRIA acted as regent for their son. In the same year Cardinal MAZARIN succeeded Richelieu who had died the previous year. Under their leadership there was a certain measure of tolerance towards the Huguenots. During the civil wars known as the FRONDE RESISTANCE (1648-1652) the Huguenots were loyal to Mazarin and were duly rewarded by the DECLARATION OF ST GERMAIN (1652) in which the King expressed his satisfaction with their behavior.

Shortly after this, however, their privileges were further limited and the last Protestant or Huguenot Synod met in Loudin in 1659.

After the death of Mazarin in 1661, LOUIS XIV (1643-1715) the Sun King, began his reign. He went to great lengths to convert the Huguenots. When even the billeting of dragoons in Huguenot households, the infamous DRAGONNADES, had no effect he proclaimed the EDICT OF FONTAINEBLEAU on 17th October, 1685.

This revoked the Edict of Nantes and resulted in the Huguenot persecutions being resumed. Once again the Huguenots fled in large numbers (200 000 and more) to other countries in Europe as well as England and America. The Netherlands received a large number of refugees, some of whom came to the CAPE.