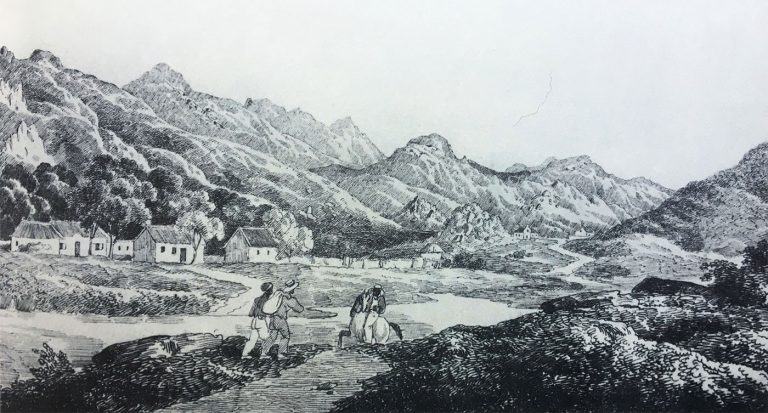 The first Europeans to settle in the Drakenstein region had been extremely poor ex-VOC employees who established themselves as subsistence farmers. The French Huguenot refugees were little better off themselves. When they were settled in the interior of the colony they were given some basic food supplies, seed and rudimentary farming equipment. The climate and terrain were unfamiliar and much of it was unsuitable for grazing or food crops. Few of them had farming skills and they had only rudimentary equipment. They also lacked the capital to buy the seeds and other basics they needed. Other problems were drought, transporting their produce to market, stock raids and unfair competition from the company officials.

Their early households were therefor characterised by owning only small numbers of cattle and sheep, having a few vines, and producing barely enough barley and oats to feed their families and animals. Aside from their own hands, and those of their family members and neighbours, very few could afford to hire others to do the work, though there were exceptions. Estienne Niel, who arrived at the Cape in 1692, hired himself out as a farm labourer to Huguenots such as Pierre Rousseau on L’Arc de Orleans and Pierre Jourdan on Cabrière. Estienne would eventually become a vrijburgher and himself hire a VOC soldier as a labourer to work his farm (La Dauphine), receiving payment of 10 guilders per month and one pound of tobacco. Perseverance paid off and several Huguenot families became successful farmers – and slave owners.

The small church at Simondium erected by the Huguenot minister Pierre Simond in 1694 was in use until the middle of the second decade of the 18th century (sources differ: 1713 – 1717), after which valley residents had to worship in Paarl on Sundays. For Franschhoek residents, this meant making a long journey from one end of the valley to the other. While this was an option for most European inhabitants it was virtually impossible for the coloured inhabitants. The solution lay in the establishment of a church in Franschhoek with its own dominee (or minister). A generous bequest from Maria Fransina Joubert enabled a chapel to be built and inaugurated in February 1833, where monthly services were held. The first permanent minister, Jacob Verhaag, was only appointed in 1836, and a parsonage was built for him in 1837 thanks to another generous donation of 5 000 Cape guilders from local farmer Eduard Christiaan Hauman. A church was built in 1845 and in the same year the first village plots were subdivided off the farm La Cotte.